One of my favorite old monster movies has got to be Boris Karloff in “The Mummy.” This is one of those movies that you can watch and try to push our of your mind but it keeps coming back for another visit. Spooky and yet it’s hard to turn away… 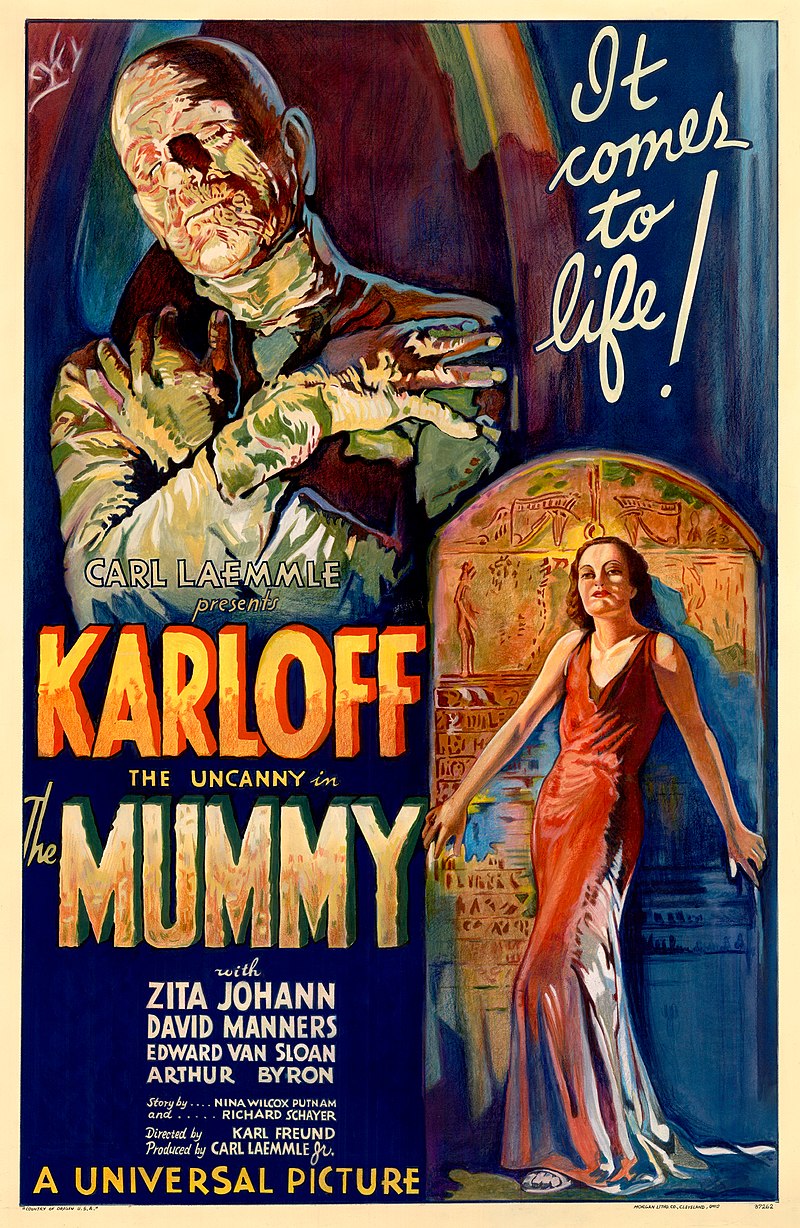 In 1921 an archaeological expedition in 1921, led by Sir Joseph Whemple (Arthur Byron) finds the mummy of ancient Egyptian priest called Imhotep (Boris Karloff). When an inspection of the mummy by Whemple’s friend Dr. Muller (Edward Van Sloan) reveals that the viscera were not removed, Muller deduces that Imhotep was buried alive for sacrilege. Imhotep had been mummified alive for attempting to resurrect his forbidden lover, the princess Ankh-es-en-amon. Despite Muller’s warning, Sir Joseph’s assistant Ralph Norton (Bramwell Fletcher) reads aloud an ancient life-giving scroll – the Scroll of Thoth. Imhotep escapes from the archaeologists, taking the Scroll of Thoth, and prowls Cairo seeking the modern reincarnation of Ankh-es-en-amon.

10 years later, Imhotep is masquerading as a modern Egyptian named Ardath Bey. He calls upon Sir Joseph’s son, Frank (David Manners) and Prof. Pearson (Leonard Mudie). He shows them where to dig to find Ankh-es-en-amon’s tomb. The archaeologists find the tomb, give the mummy and the treasures to the Cairo Museum, and thank Ardath Bey for the information.

Imhotep encounters Helen Grosvenor (Zita Johann), a woman bearing a striking resemblance to the Princess. Believing her to be Ankh-es-en-amon’s reincarnation, he attempts to kill her, with the intention of mummifying her, resurrecting her, and making her his bride. She is saved when she remembers her past life and prays to the goddess Isis to save her. The statue of Isis raises its arm and emits a beam of light that sets the Scroll of Thoth on fire. This breaks the spell that had given Imhotep his immortality, causing him to age rapidly and then crumble to dust. At the urging of Dr. Muller, Frank calls Helen back to the world of the living while the Scroll of Thoth continues to burn.

Inspired by the opening of Tutankhamun’s tomb in 1922 and the Curse of the Pharaohs, producer Carl Laemmle Jr. commissioned story editor Richard Schayer to find a literary novel to form a basis for an Egyptian-themed horror film, just as the novels Dracula and Frankenstein informed their 1931 films Dracula and Frankenstein. Schayer found none although the plot bears a strong resemblance to a short story by Arthur Conan Doyle entitled The Ring of Thoth. Schayer and writer Nina Wilcox Putnam learned about Alessandro Cagliostro and wrote a nine-page treatment entitled Cagliostro. The story, set in San Francisco, was about a 3,000-year-old magician who survives by injecting nitrates instead of via supernatural cause like with Imhotep’s case. Laemmle was pleased with these ideas, and he hired John L. Balderston to write the script. Balderston had contributed to Dracula and Frankenstein, and had covered the opening of Tutankhamen’s tomb for New York World when he was a journalist so he was more than familiar with the highly popular tomb unearthing. Balderston moved the story to Egypt and renamed the film and its title character Imhotep, after the historical architect. He also changed the story from one of revenge upon all the women who resembled the main characters’ ex-lover to one where the main character is determined to revive his old love by killing and mummifying her reincarnated self before resurrecting her with the spell of the Scroll of Thoth. Balderston invented the Scroll of Thoth, which gave an aura of authenticity to the story. Thoth was the wisest of the Egyptian gods who, when Osiris died, helped Isis bring her love back from the dead. Thoth is believed to have authored The Book of the Dead, which was no doubt the inspiration for Balderston’s Scroll of Thoth.

Universal has announced another forthcoming remake of the film. The new film will be directed by Alex Kurtzman. In October 2015, Kurtzman hinted that the new reboot could possibly feature a female lead as the mummy character which would be the first for the film franchise. Universal’s The Mummy is planned as the first film in a series of interconnected monster films as Universal plans to build a franchise out of its vault of classic movies. On January 21, 2016 it was announced that Tom Cruise would be starring in the remake, which is slated for release on June 9, 2017.

If you can handle more, here it is on Wikipedia.