The Land that Time Forgot 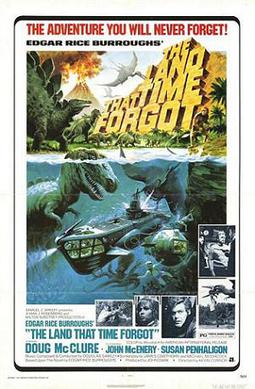 If you’re looking for a classic (b-movie) to watch sometime soon, then look no further! Filled to the brim with good monsters, good mayhem, and good cheese (the acting, folks)! Watch the movie trailer here!

Spoilers ahead. But really, telling you the plot to this sort of film really doesn’t ruin it. You have to see it, to believe it!

The movie begins with a bottle with a written manuscript inside it being thrown into the sea, hoping for it to be discovered later. Floating to coast of England, a sailor discovers the bottle and opens to read the manuscript as Bowen Tyler (Doug McClure) narrates the events, much as we see in many Edgar Rice Burroughs novels.

The story is set during World War I and involves the survivors of the sinking of a British merchant ship who are taken on board a German U-boat.

Bowen Tyler and Lisa Clayton (Susan Penhaligon) are passengers on the ship torpedoed by Captain von Schoenvorts (John McEnery). Along with a few surviving British officers, Tyler convinces the other men to take over the surfacing submarine, this being their only chance for survival. After confronting the Germans on the deck, a fight ensues and they seize the German U-boat. Tyler takes command hoping to sail to a British port. Von Schoenvorts has his crew steer toward a safe sea port. But German officer Dietz (Anthony Ainley) gets loose and smashes the sub’s radio.

Off course and running out of fuel in the South Atlantic, the U-boat and its crew happen across an uncharted sub-continent called Caprona, a fantastical land of lush vegetation where dinosaurs still roam, co-existing with primitive man. There are also reserves of oil which, if the Germans and British can work together, can be refined and enable their escape from the island.

Tyler discovers the secret of Caprona: individuals evolve not through natural selection, but by migrating northward across the island. With the submarine working again but a sudden outbreak of volcanic eruptions across the island, Dietz starts a mutiny and shoots Captain von Schoenvorts to take command. Dietz abandons Tyler and Clayton in Caprona in an attempt to escape, but the U-Boat cannot function in the boiling waters and the crew is killed as it sinks. Tyler and Clayton are stranded and being the only survivors of their group, they are forced to move northwards. The movie ends with Tyler throwing the bottle, with the manuscript inside it, as seen in the beginning of the movie.

Don’t get this confused with it’s sequel: The People that Time Forgot.