You simply can’t go wrong having a giant VW Spider Bug in your front yard! You know, impress the neighbors. Make your yard art into a destination stop for all those looking for a good photo for their Americana Pinterest board.

Reminds me of this classic:

The Giant Spider Invasion is a low-budget 1975 science fiction horror film produced by Transcentury Pictures, a partnership owned by the film’s director Bill Rebane. The film is about giant spidersthat terrorize the town of Merrill, Wisconsin and the surrounding area. The Giant Spider Invasion was given a U.S. release in theaters in 1975, and was distributed by Group 1 Films. The iconic theatrical poster art was a throwback to the monster movies of the 1950s. The film received a considerable theatrical run and became one of the fifty top-grossing films of that year. After a three-time ABC television network run, the movie achieved additional exposure many years later, when it was featured in a 1997 episode of Mystery Science Theater 3000 (MST3K) (season 8, episode 10). It is now regarded as a cult classic in the B movie realm. The film is listed on ‘The 100 Most Enjoyably Bad Movies Ever Made’ in the book The Official Razzie Movie Guide by Golden Raspberry Award founder John Wilson.

Read more about this fabulous piece of art here. 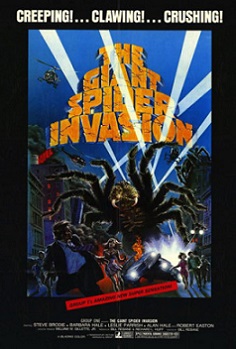